Singing through the Heart of Winter

On Retreat in Preparation for Winter

Over the first weekend of December, Dena and I attended one of our favorite experiences called Singing Through the Heart of Winter. This annual end of year retreat brings together a number of friendly folks from our greater NorCal tribe. I really love the location being nestled amongst beautiful, tall redwood trees. Singing through the Heart of Winter has been happening for the last eight or nine years at St. Dorothy’s Rest, Camp Meeker, CA (west of Santa Rosa). Since being established in 1901, St. Dorothy’s Rest is the oldest camp in California.

This was our second time attending. It was a beautiful way to celebrate our 12th year wedding anniversary, which is later this month. The retreat was led, as usual, by Doug Von Koss and Richard Naegle, co-directors of the Noah Project. 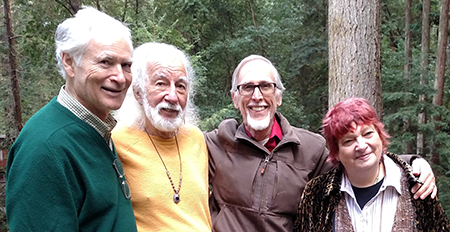 This weekend is a preparation for the Solstice season in the quiet and beauty of the redwoods. We were invited to join with kindred spirits in sharing good food and company, celebrating via tears and laughter, and exploring Soul’s longing in the darkest night. The purpose is to embrace the heart of winter while helping sing the world once again into being. So, there was plenty of singing through the heart (all acapella with no instruments), sprinkled with poetry, story, and ritual.

I appreciated taking a break from the chaos and troubles of the world (i.e., last month’s election) during this dark time of year. It helped me to get grounded in the deeper mystery of the holiday season and connected with a greater reality. As a result of going off on retreat, I felt refreshed and less distracted by the commercial hustle or old memories of years gone by. I’m thinking it would be wise of me to make this end of year retreat an annual ritual.

“Be the change you wish to see in the world”

Without prior planning, I over-extended the previous weekend’s retreat. I got sick after arriving home, and wound up taking a different kind of personal retreat.
I stayed under the weather for most of the week, until I finally began to feel better by the weekend.

While I was “busy” recuperating, I viewed some cool music documentaries on NetFlix. I watched Jaco, a biographical film about the life of Jaco Pastorius, the great jazz/rock/funk bass player. It cover his life’s journey from childhood in Florida to the tragic end of his life. Next in line was Jimi Hendrix: Voodoo Child. This piece has solid content covering Jimi’s personal musical journey from the early to final years. It was a collage of video, photos, and narration from personal letters. Finally, I viewed a documentary title, Austin to Boston. It follows a group of young mostly folk musicians as they get to know each other on a long road trip, gigging across America from, yup, Austin to Boston. It’s an interesting look behind the scenes that reveals the human side of musicians on tour.