Music From His Soul

This page includes selected MP3’s and videos of various songs that have made their way from my imagination to the outside world.

I’ve considered a good handful of ways to describe the style of my music: Conscious Americana, Spirit Americana, Thinking Americana, Mystic Americana, Positive Americana, and Changing Americana. Wow, that’s a lot of Americana! A simpler way to express my musical style would be (Mostly) Acoustic Music for Thinking Folks.

I like to blend folk with rock, blues, jazz, pop, and world beat. I’m an eclectic music man which comes from growing up during that rich cultural stew known as the ’60s. There was so much crisscrossing between musical styles that just hadn’t happened like that before. I think it excited my creative soul and influenced me to stay open to new possibilities. Also, my father was a big musical influence on me. He was a musical explorer who began his musical journey playing traditional music on piano, such as choral pieces for church choirs and classical compositions and came to enjoy playing showtunes and even some jazz in his later years.

My musical creations have been inspired by both western and eastern forms (country music, Indian chants, Celtic reels) with an appreciation of known (and lesser known) master songwriters such as Paul Simon and Bruce Cockburn, as well as popular (and cult favorite) bands like The Beatles and King Crimson. Also, I’ve been inspired to write songs by books I’ve read (ex., Ayn Rand’s, The Fountainhead), hearing poetry that speaks to my deeper self (ex., William Stafford’s The Way It Is), or just in the moment real life experiences like visiting a beautiful meditation garden on a summer afternoon.

A common question for songwriters is, “Do you write the words or the music first??” I’ve experienced both of those approaches, as well as words and music coming through together at the same time. One of my favorite ways to write a song is to take a short piece like a chant or a refrain and write the rest of a standard song structure (verse, bridge, or chorus) around that. An example of that technique is Gaia’s Voice which appears on my In This Circle album. It started out as hearing someone else repeating four different lines in a chanting fashion. That wound up becoming the first verse of a song.

When it comes to co-writing songs with others, I’ll join in by either writing a verse, the chorus, or the bridge. My wife, Dena, and I have written a handful of songs together in that fashion.

Since I’m also a poet, I’ve taken some of my poems and turned them into songs. An example of that is Four Corners which appears on my Older and Wiser album. In truth, I began writing poems as a young man after I had already begun playing guitar as a teenager and learning songs written by other folks. So, the guitar-playing and poetry eventually came together and, voila, I was on my way to becoming a songwriter. It does seem that I have a larger number of poems than I do songs which could be considered as either a quality problem or a songwriting opportunity. As always, the choice is mine to make. 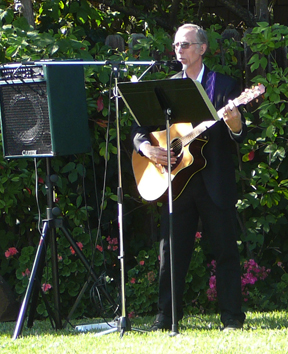