Music on the March

Music on the March 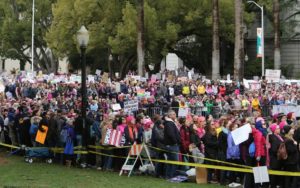 Last weekend on Saturday, January 21st, the Women’s March happened around the country and the world. Although I had the intention of going in support of my sisters, known and unknown, other personal commitments took precedence. However, my beloved partner, Dena, headed downtown to the Sacramento capital with a few of her friends and about 20,000 others. I understand that a number of men and children also joined in.

According to its official organizers, the Women’s March was not primarily an anti-Trump effort rooting for him to fail as president. And, its mission was to stand up for equality. The Washington Post stated that 500,000 folks attended the march in Washington, D.C. I’ve heard there were near 1,000,000 marchers across the country, and even more worldwide.

It was encouraging to see so many individuals express themselves and take the time to lend their voice and presence to a peaceful demonstration in support of equality and justice. I’m aware that the grand tradition of marches, rallies, and demonstrations goes way back in this country. The roots of that tradition goes all the way back to the beginnings of American history, starting with the Boston Tea Party, the American Revolution, and the Abolition movement. The size expanded in the 1960’s with the Civil Rights movement, the Anti-War movement during the Viet Nam war, and the Women’s Liberation movement.

Looking Back and Remembering

After seeing some photos and videos on social media the day after, I was reminded of the Great March on Washington in 1963. For those of you who don’t recall, that gathering included the well known, I Have a Dream speech, by Martin Luther King, Jr. At the time, it was estimated that 250,000 folks showed up with the majority of marchers being black. As you may know, this march was the catalyst to pass the Civil Rights Act of 1964. The music soundtrack for that event was a combination of folk music (Joan Baez, Bob Dylan, and Peter, Paul, and Mary) and Negro spirituals (Mahalia Jackson, Marian Anderson, Odetta, and the Freedom Singers).

As one of the best known folk artists from the 60’s (and beyond), Joan Baez has always considered social justice important which has included a focus on civil rights (nationally and internationally). In the early 60’s, she helped spark the folk music revival. She was one of the first artists to use their popularity as a vehicle for social protest while singing and marching in support of social issues.

Along with singing at the March on Washington, she sang at Free Speech Movement rallies in Berkeley, CA and at Woodstock in the late 1960’s. In her later activities, she sang at Live Aid in ’85 and on an Amnesty International tour in ’86. This month, Joan turned 76. Happy birthday, Joan! Thank you for all of your musical inspiration and blessings over the years.

I was deeply moved by one particular young artist, MILCK, who organized a flash mob with a group of other women to sing at the Women’s March this month in Washington, D.C. During the march, she and her flash mob cohorts sang her original song, Quiet. Here’s her official video for the song.

I challenge you to watch these videos and not be moved deeply like I was, especially by the full version of the song. According to the bio on her website, MILCK is an abuse survivor who’s also battled with depression and other issues. I respect all artists who have the courage to express creatively with focus and purpose, as a path to heal their personal pain. At the same time, it’s great to see the torch of social activism through music being passed on from elders such as Joan Baez to young artists like MILCK. There is power in the music. “We shall overcome!”