Out on the Farm

This summer, I was a volunteer out at Soil Born Farms. Since the early 2000’s, it’s been an urban working farm providing quality organic produce and agricultural education for the community. Also, the farm has a weekly summer camp program for grade school kids.? Since I retired in 2015, I?ve been open and curious about the idea of participating in some form of service in community.

The Farms? summer camp program is held at their American River Ranch location in Rancho Cordova. I had been reading about it for a number of years in the Sacramento Natural Food Co-op newsletter. And, I resonated with the idea of helping city kids connect with the natural world in a fun, non-academic environment. 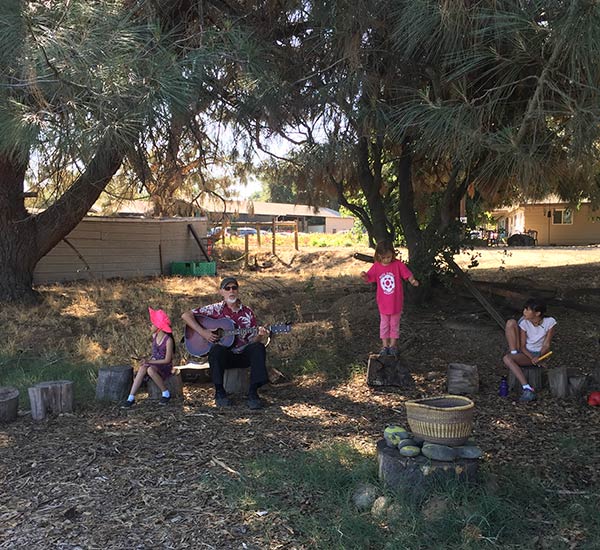 When I was a younger man in my early twenties, I was a teacher?s assistant at a preschool in Denver, Colorado. Through that experience, I learned how to just be and connect with kids. A few years later, I met a single mother and became a father to her preschool aged daughter. My favorite time with my young step daughter was making up stories for her at nap time. Both of these experiences with young children gave me the inspiration to become a Waldorf school teacher. At the time, I had the vision to create a healthy, supportive connection with children and guide them in a good way during their magical years of early childhood.

After moving to California in the late 70’s with my wife and now two kids (my son was less than a month old), I had planned to enter a Waldorf teacher?s training program. I thought I was ready to live and fulfill my earlier vision. However, due to life circumstances at the time, my vision sadly did not come to fruition.

Apparently, the seed of that vision has remained dormant within me all these years. So, I was pleasantly surprised to have that vision germinate and begin to flower for me this summer at Soil Born Farms.

Helping out at Summer Camp

In early June, I had an informal interview with Alyssa Kassner, Youth Education Coordinator at Soil Born Farms. She kindly explained the general flow of each day with the kids and shared about being flexible with the activities of summer camp. This was going to be a new experience for me. I must admit I felt the butterflies of fear within. During the interview, I was asked if I would be willing to bring my guitar and play some songs for the kids. And, that was the turning point for me. So, in the spirit of Meadowlark, I happily agreed to try it out and see where it led me. In the following days, I learned there were to be two different camp focuses – Farm Camp and Nature Camp. 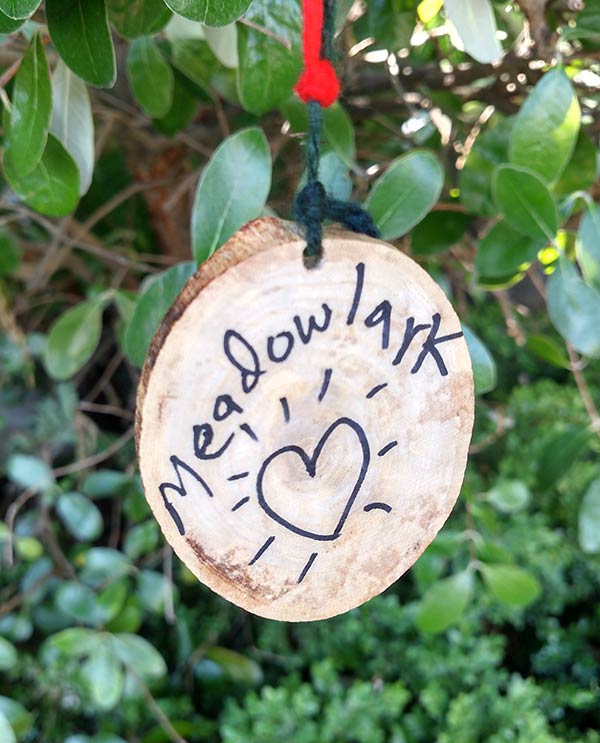 During the course of each week?s camp, different groups of kids came and went. All of the kids were encouraged to create a Nature name to use at camp and to make a name tag to wear and carry in the spirit of that animal or plant. It was fun to see the various Nature names kids (and the adult staff) came up with: California Poppy, Serious Scrub Jay, and Fox. Here?s the name tag I made and wore for all of the camps.

After the kids arrived each morning, I enjoyed throwing the ball with them and blowing and catching soap bubbles. And, then there were fairy castles and villages. Wow, I had no idea building fairy castles was so much fun and so much work! This was some serious business.? ;-)? The power of young folks? imagination is such a blessing. It still amazes me how the joy of simple play with young folks connects me with my own little boy within. 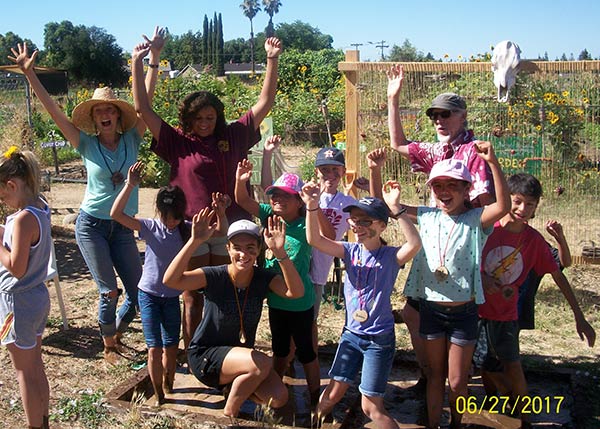 Singing in the Sacred Circle

There is a circle of big trees on the farm sheltering a large circle of tree sections aptly named, the Sacred Circle. After the kids arrived for camp and played for a bit, we would head over to the Sacred Circle for singing. This is where the musical spirit of Meadowlark really sang out. The kids chose handmade shaker gourds or clapper sticks to play. And, they were encouraged to take turns leading the circle in their own rhythms.

As previously mentioned, one morning I was helping the kids build fairy castles and villages. I was being useful by collecting acorn caps and white quartz rocks to bring to the young architects. While searching for these materials, I was inspired to create a fairy castle song. Later, in the Sacred Circle, I shared the song with everyone. It was such a gift to see kids expressing their joy through singing during our time in the circle. And, the dancing was a delightful surprise!

Connecting with the Land

Most mornings, I arrived early before the kids arrived. During those times, I was able to connect with the spirit of the land and my deeper self. I appreciated observing the birds flying about in the trees and bushes, the farmers out in the field rows working, and feeling the fresh morning air of a new day. It became my summer morning meditation.

And, speaking of meditation, one of my favorite activities during Farm Camp involved each person (kids and staff) finding a quiet place away from others. That quiet place became their own personal ?sit spot.? Also, each person took a handmade Nature Journal with them to either write or draw in. The intention of the ?sit spot? was for individuals to connect with nature and themselves. I think this is a great way to introduce kids to the idea of slowing down and listening within and without. When it was time for the ?sit spot?, I gravitated towards sitting in the Sacred Circle alone. Here are some pages from my own Nature Journal.

The River is Flowing

This year, Nature Camp was added to Soil Born Farms? summer program. It’s an opportunity for the kids to spend time off-site by exploring the American River Parkway which includes the American River Bike Trail. We also took time to explore and wade in Cordova Creek which feeds into the American River. To help create a connection with water, I shared river songs in the Sacred Circle with the kids before hiking to the river. As a group, we took a few pleasant one mile hikes to Riverbend Park where we played games and just spent time hanging out with nature.

During one of those nature “hang outs”, one of the boys actually climbed a tree and caught a lizard. He was a happy lad, as he had fun showing off that lizard before letting it go. Also, some of the other kids had fun singing their own version of Down by the Bay while on the trail, there and back again. Such a powerful way to express the joy of being alive while connecting with the natural world!

I really enjoyed my time with the kids and the staff at the farm as a volunteer for their Farm and Nature camps. And, I was honored to be included as an elder in the group. The experience helped make my summer special and I look forward to volunteering again next year. I’m glad I was able to have fun AND be of service to the kids.

On the last day of camp, I heard about Roots and Wings, a home school class opportunity for students at the farm that takes place every other Friday from fall through spring. I think it just might be a good way for me to stay connected with the folks on the farm and the spirit of the land, as well another volunteer opportunity.

Soil Born Farms – Check It Out

Now, if you still haven?t been out to Soil Born Farms, what are you waiting for? Go check it out and be sure to visit their farm stand that?s open every Saturday from 8 am to 12:30 pm until November 18th.