June is Bustin’ Out All Over… 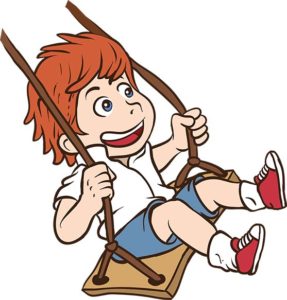 For me, June is bustin’ out all over. I woke up in a good mood one morning this week, remembering an experience from my early adolescent years. Now, it?s become a precious memory for me.

One glorious Indiana day in June, either in the late morning or early afternoon, I was swinging away vigorously on our family’s playground set. As I recall, it was located behind the garage and out of sight from the house. Also, I remember just being happy to be alive.

Best of all, as I was swinging away, I remember breaking out into a raucous version of “June is Bustin? Out All Over” from the musical, Carousel. I was fully in my joy of life and just being grateful for summer vacation.

In My Heart’s Imagination

Now, this playground set was a heavy duty sucker that was built to handle five kids and, probably, last for years. According to two of my older siblings, our Dad bought it for us kids when we lived in Edmund, OK. As I visualize it, the set was made out of heavy ? inch galvanized steel with regular swings, a two seated see-saw type of swing, and a ladder.

Apparently, when we moved from the house in Bloomington to a town in southern Indiana, that playground set was left behind because I never saw it again. A few years ago, my oldest brother visited Bloomington with his youngest daughter. During the trip, they went to see the old house. Recently, in a phone conversation, he told me that the playground set is no longer there. Still, in my heart?s imagination, it?s standing out there in the sun, next to the pasture fence, just waiting for someone to come along to swing and sing joyfully. May you find your own personal joyful spot this summer!

June is Bustin? Out All Over?

March went out like a lion
A?whippin? up the water in the bay
Then April cried and stepped aside
And, along come pretty little May

May was full of promises,
But she didn?t keep ?em quick enough for some
And a crowd of doubtin’ Thomas’s
Was predictin’ that the summer’d never come

June is bustin’ out all over
All over the meadow and the hill!
Buds’re bustin’ outa bushes
And the rompin’ river pushes
Ev’ry little wheel that wheels beside the mill!

June is bustin’ out all over
The feelin’ is gettin’ so intense,
That the young Virginia creepers
Hev been huggin’ the bejeepers
Outa all the mornin’ glories on the fence!
Because it’s June…, June, June, June