I have learned that every day is a brand new day, full of possibility and promise. I sing this song as a positive affirmation to remind myself and others of this. I can re-start my day when it?s going sideways or not the way I would prefer.

It’s in the Genes 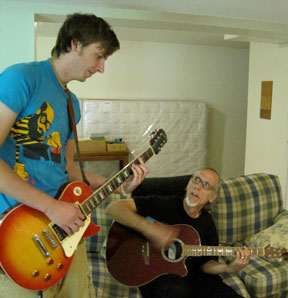 I have musical roots in my family with various relatives and ancestors playing piano, organ, violin, harp, guitar, flute, and clarinet. I?m also aware that there?s been a lot of singing in churches, along with on stage and around the campfire.

I?m happy to say that this tradition continues on with younger members of the McKitrick tribe. As I recall, during his long life, my father gave piano lessons to most of his grandchildren and even his great grandkids. My son played drums for awhile in grade school and piano and saxophone in his earlier college days. I have three nephews that all play guitar at differing levels of expertise.

It Started with a Jam

About five years ago during a family visit to the East coast, I had a jam session with my nephew, James. One fine morning, he and I descended to the music cave in his parents? basement and plugged in the guitars. I was excited about the possibilities after talking with him on the phone about music and guitars since he had been in high school.

We played some old rock classics to get warmed up and he got to show off his chops on the fret board. Then, I just started jamming on rhythm guitar with a chord progression and James joined in. I got inspired and started singing about a ?brand new day? and ?walking outside to greet the day.? It felt like a ska tune in the style of an ?80s band called The Police.

Since the tune wouldn?t leave me alone, I had to finish the lyrics and have enjoyed playing it since then. I love the feel of it and it?s got a groove that just won?t quit. I?ve come to realize that the upbeat nature of Brand New Day?s lyrics also reminds me of a classic pop tune from the mid-80?s called Walking on Sunshine by Katrina and the Waves.