Adventures in the Partial Capo Universe 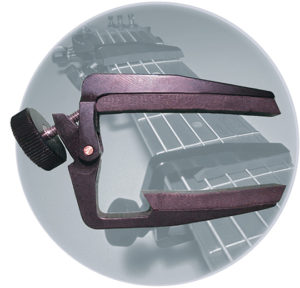 I’ve had a vague knowledge of partial capos for awhile, yet I had never used one. Last autumn, I was enjoying a live show by Carrie Newcomer at the Freight and Salvage in Berkeley, Ca. I noticed she was using two (and sometimes three) different Kyser model capos at the same time on her guitar. This inspired my musical curiosity. So, I decided to do some research about it. After a bit of online searching, I discovered a new website: PartialCapos.com. It belongs to the illustrious Harvey Reid.

Mr. Reid writes about his experience as a guitar player. For him, it’s been a long journey of exploration in the world of partial capos:

“About me… I have been using various kinds of partial capos for both songs and instrumentals in my music since the mid 1970s, and I am probably the first modern person to write, publish and record music for the partially-capoed guitar. I won the National Fingerpicking Guitar Contest in 1981 (without using one) and have recorded about 200 different songs and instrumentals in dozens of different capo configurations. I have studied this idea very deeply, and I want to be your guide to this fascinating musical world. I hope to show you what they can do for your music. There is a surprising amount of misinformation and confusion about partial capos, and many a great guitarist has failed to see their musical value right away.”

Wow! I found myself entering an alternate universe on my guitar. When you use a partial capo on guitar, you can play in open tunings without de-tuning and re-tuning the guitar. Furthermore, it gives you access to many guitar chords and sounds that just aren’t possible in standard tuning, or even traditional open tuning. If you’re a guitar player, I hope this is getting your attention and piquing your curiosity.

After working with the IDEA books and the capos for a week or so, I contacted Mr. Reid. I sought permission to write about my personal experience with them in my weekly music blog. He graciously agreed. And, he thanked me for my interest. Apparently, he is on a mission to spread the word about using partial capos. He says, “Partial capos are tricky to understand, and these books are the definitive manuals for a remarkable but invisible musical “hyperspace” that only partial capos can unlock.”

So far, the Liberty Flip capos seem simple to use. Additionally, they have a nice streamlined feel to them. I’m enjoying the clear explanations and presentations of all the new guitar chords in the IDEA books. Also, I find that the back stories and musical anecdotes provide a friendly context. One of my favorite anecdotes is about a new chord that sounds like the beginning of the Beatles classic tune, Eleanor Rigby, when it’s played in arpeggiation. I have to say that proved to be true after checking it out on my own guitar. Cool stuff!

I appreciate all of the hard work and time Mr. Reid has put into exploring this alternate guitar universe. And, I really appreciate the effort and expertise he has invested to develop these elegantly designed partial capos. Additionally, I’m grateful that he chose to write about and share his musical adventures with other guitar players and the world.

In my book, Harvey Reid is a guitar pioneer and a visionary.

Great work, Harvey! I’m happy and honored to support you in your mission. Additionally, I will be recommending the Liberty Flip capos, along with the IDEA books, to all my guitar playing friends.

*[Disclaimer: I am not a sales agent for Liberty Flip Capos, Liberty Guitar books, or Woodpecker Multimedia. Nor, have I received compensation for this blog post.]