One and many – Noel Paul Stookey was one third of the very popular folk trio, Peter, Paul and Mary (PP&M) back in the 60’s. From what I’ve read, the trio decided to use Noel’s middle name, Paul, for a stronger group name. Their albums and album covers are part of my grade school musical memories and I remember listening to them back in the day. As I recall, Peter, Paul and Mary was one of my sister’s favorite music groups. Also, I thought they were cool, especially with Peter and Paul sporting their goatee beards and looking like beatniks out of the 50’s. More than that, I really enjoyed their vocal harmonies and the bold songs they chose to sing. Furthermore, Paul (or Noel’s) quiet confidence in his singing and guitar playing made quite an impression on me.

When I reviewed the history of PP&M, I was reminded that they disbanded in 1970 to work as solo artists. Oddly enough, that’s the same year The Beatles broke up before pursuing their individual musical careers. Noel released his debut solo album, titled Paul and…, in 1971. His album included an original tune, The Wedding Song (There is Love) which remains a popular choice for performance at weddings. I, myself, have played that song for at least at one wedding. As it turns out, Peter, Paul and Mary did get back together for a summer reunion tour in 1978. And, they continued to sing and record together until the late 2000’s when Mary died from chemotherapy complications.

As It Was, In the Beginning…

Recently, I heard Noel sing a gently prodding political parody song, Impeachable, on YouTube. I hadn’t followed his musical career for many years. So, I began to wonder what he’s been up to all this time. After a bit of Internet digging, I found out that Noel has kept busy with songwriting, singing, and recording. He currently lives in Maine and built a recording studio and started his own record label. He even performs live with Peter occasionally. If you’re curious, his website is noelpaulstookey.com.

One of Noel’s most recent albums was released in 2012. It’s titled, One and Many, and is chock full of some great tunes. Noel shows off his guitar chops on one song called, Jean Claude. I was so enthralled with the cool bell tone riff on it that it stuck in mind for several days. However, my favorite overall tune on this album is the title song, One and Many. I love the chord progression and the call-response chorus with the audience is an instant folk classic. I’m grateful to be reminded that some things (or people) in life just keep getting better. Thank you, Noel, for all the great music you have created and shared with us in your life’s journey!

Last spring on one of my long walks in our neighborhood, I came upon a large tree with many finches perching, flitting back and forth, and calling out. I was inspired to write about my experience which Dena then crafted into a Daily Napkin post. This spring, I observed that same large tree being removed by a tree crew. Recently, on another long walk through our neighborhood, I heard and observed another flock of finches in a different large tree not far from the one that was removed. I decided it was a good time to share the writing this week. Hail to the birds of springtime! 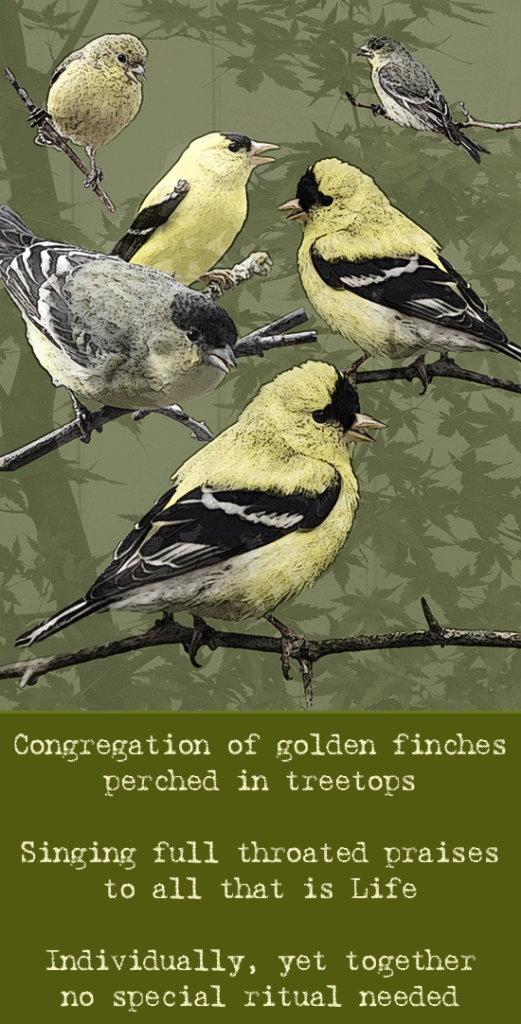