I wrote Angels Here in the late 1990’s. I had experienced a dry spell around songwriting during most of the 90’s and wasn’t playing much guitar at all.

At the time, I was married to my second wife, Patti. We lived in a nice house in the Hollywood Park area of Sacramento. I remember that there were fruit trees in the back yard and a huge deodar cedar tree as well as a beautiful magnolia grandiflora in the front yard.

Inspired by a Film

I had watched a German film titled, Wings of Desire, at the Tower Theater which is a local art-house cinema. They show independent and foreign films at the Tower. I was deeply affected by this film. Here’s a short interview with the film director, Wim Wenders. He talks about his inspiration to make the film.

I was inspired by the film to write a song from the perspective of being an angel that observes human beings. Although the angel is unable to directly change or prevent human behavior, still the angel has great compassion for them. For me, the song is about the human longing for connection with something greater than one’s self. Some folks call that greater presence, the Divine. 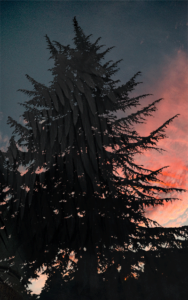 I was struck by a scene in a large library where there are many people sitting at tables reading quietly. Meanwhile, various angels stand near them. They hear all the silent thoughts of the humans as a musical murmuring. At a certain point in the story line, the main angel character falls in love with a woman who is a trapeze artist in the circus. He tells another angel of his “desire” to become human, so that he can experience life through a human’s five senses and also feel emotions, such as love. I was bemused to get a different viewpoint on the old concept of a “fallen angel.”

Birds in a Tree

I recall the initial inspiration to write Angels Here occurred on a rainy evening after seeing the film. I had either heard or seen small birds nestled in the previously mentioned deodar cedar tree in the front yard. That sparked this line in the song, “…And I sing with the sparrow in the cedar tree while dancing in the rain.” I’m always fascinated with how creative inspiration helps to bring new songs through me.